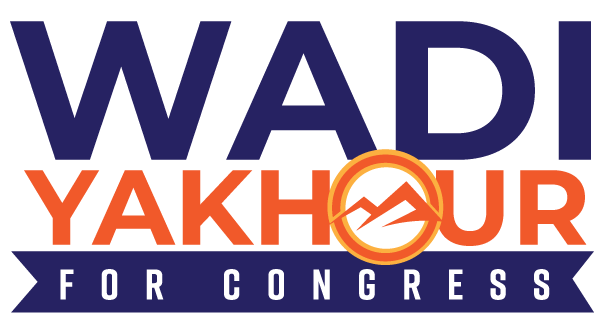 VANCOUVER, Wash., Feb. 23, 2021 (GLOBE NEWSWIRE) — Today, United States Navy Veteran, Trump Administration Appointee, and life-long Republican Wadi Yakhour officially launched his campaign for Washington’s third congressional district. The district’s current Representative, Jamie Herrera Beutler, was one of ten Republicans to recently vote to impeach President Trump.
“For the last four years, I have watched self-serving politicians fight only for themselves and the powerful special interests who control them, instead of the voters who put them in office,” said Wadi Yakhour. “It is high-time our district and great Country have representatives who steadfastly stand up for their values.”“Censorship and socialism have no place in the United States of America, free speech should be free, our elections must be made secure, and our schools and businesses should be open,” Yakhour continued.“One day, Jamie Herrera Beutler will make a great Biden Administration appointee, CNN contributor, or Lincoln Project Board Member – but she certainly no longer has a place representing the Republican party for Washington’s third district, and I am running to help her make that career change,” Yahkour concluded.Wadi is a home-grown representation of Southern-Washington and its citizens, having moved to Vancouver, Washington with his family at the age of 11. Wadi learned the importance of service to his local community and Country at a young age as he watched his mother serve as Clark County Deputy Sheriff for nearly twenty years.Following in her footsteps, Wadi joined the Navy in 2008, where he served as an Aviation Warfare Systems Operator. During his service, Wadi overcame severe injuries from survival training and went on to conduct missions in the Gulf Coast, South China Sea, and Central America across multiple deployments. Wadi would later receive the Navy Achievement Medal in recognition of his service to the Country.Returning home as a Veteran, Wadi enrolled at Washington State University and continued to seek out ways to serve his community while earning his bachelor’s degree. Inspired by an outsider candidate who was willing to challenge the status quo, Wadi began volunteering for the Trump campaign seven days a week, while simultaneously being a full-time student. It did not take long for those around him to recognize Wadi’s work ethic. He quickly rose in the ranks and was eventually named Communications Director for the Western region.Following the historic success in 2016, Wadi was again called to serve his Country, this time as a Presidential Appointee in the Trump Administration. Wadi began his service on Inauguration Day in 2017 and went on to loyally and honorably serve for the entire four-year term. During his tenure, Wadi was appointed Special Assistant to the Secretary at the U.S. Department of Interior and also served as Chief of Staff at the Selective Service System.Wadi’s insatiable thirst for service to his Country has now led to a bid to unseat Jamie Herrera Beutler in Washington’s third congressional district. Having watched so many self-serving politicians fail to stand for their constituents and America’s values, Wadi decided it was finally time to just do it himself.www.wadiforcongress.comTim Lineberger (714) 676-4317 or [email protected]